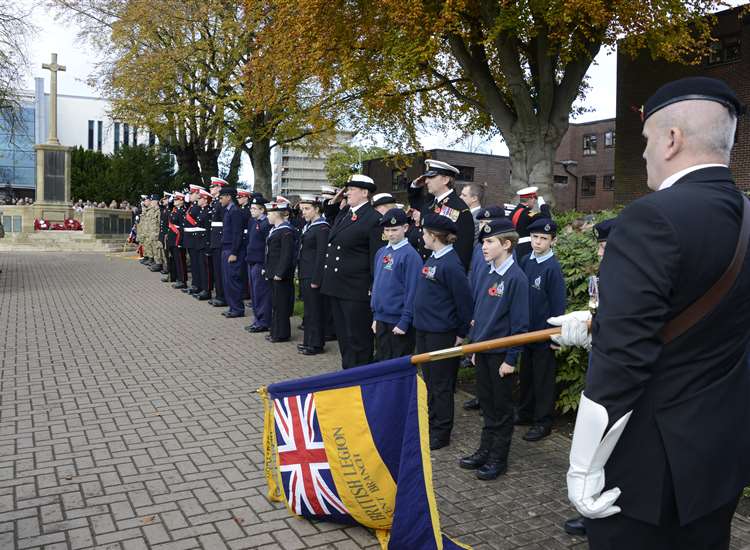 Hundreds gathered to remember those who gave their lives in the First and Second World War and the many conflicts since.

The service at the War Memorial and Memorial Gardens in Ashford town centre was led by Rev Alan Dinnie from the Willesborough Baptist Church.

He led the service and hymns, with music performed by the Ashford Concert Band, while the Last Post was played by trumpeter Mike Riley, while representatives from the armed forces, community groups and other dignitaries laid wreaths at the Memorial in Church Road.

Rev Dinnie said: “I thought it went very well and there was a large number of people present, and I was asked to work with the Royal British Legion this year.

“I saw lots of people both young and old gathering together and remembering. There were a range of different groups attending, which reflects how Ashford is changing. It’s important people remember the past and learn lessons from the past.

“The wars and conflicts are part of our history and are the experience of countless people. So it’s good to remember them, and give people the opportunity to grieve for their very real sense of loss.

“Everyone has a personal story, and though the loss and grief might have been many years ago, it is like yesterday for many people.”

Also attending the service was Ashford Mayor George Koowaree and his partner Gloria Champion, along with councillors and Ashford MP Damian Green.

They were joined by representatives from the Royal British Legion and from all the armed forces.

Following the service, the Sea Cadets led the parade through the town centre. They were joined by Army Cadets, armed forces veterans, Girl Guides groups and other community groups.

To support the ongoing work of the Royal British Legion, visit www.britishlegion.org.uk.